Entertainment in exchange for loss of data!

There’s a new game available for download on the internet called Loose/Loose. It has the look and feel of the arcade classics from the 80s like Space Invaders and Missile Command.

The following snapshot shows a lone silver airship at the bottom of the screen battling multicolored alien ships descending down on him: 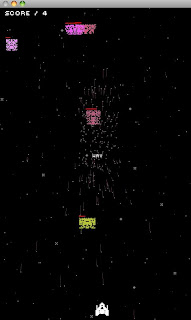 But wait…if we zoom a little closer on those alien ships that have been shot and that has exploded into a hundred tiny pieces and…are those words spelling out file types names (wav) !? 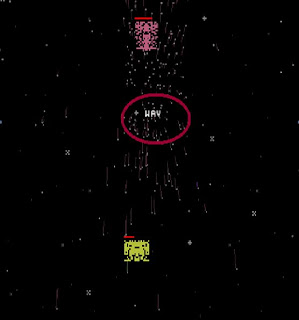 Apparently, this seemingly innocent and nostalgic piece of software comes with a nasty twist. Each of those alien enemy ships represent an actual file chosen at random in your hard drive. Destroy an alien ship and you delete the file it represents permanently! Entertainment in exchange for loss of data!

The game’s creator, Zach Gage, is a digital mixed media artist who has lately been active in developing applications for the iphone. Based on his web page, he seem to want us to consider this video game as a testament to our modern age’s increasing acceptance of technology as a ‘given’ in our lives…how it has become as mundane and ingrained to us as our day to day tasks.

As quoted from his site:
Why do we assume that because we are given a weapon an awarded for using it, that doing so is right?
By way of exploring what it means to kill in a video-game, Lose/Lose broaches bigger questions. As technology grows, our understanding of it diminishes, yet, at the same time, it becomes increasingly important in our lives. At what point does our virtual data become as important to us as physical possessions? If we have reached that point already, what real objects do we value less than our data? What implications does trusting something so important to something we understand so poorly have?
And so the big question: is this a philosophical piece of art, or is it an amusing Trojan with a cruel payload? There seem to be no social engineering involved, and Mr. Gage gives ample warning to anyone who downloads his game: 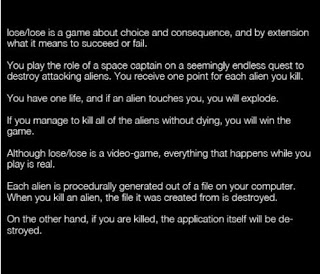 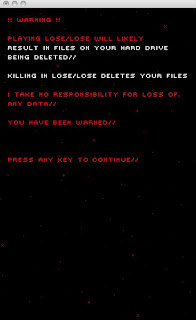 Technically, however, a Trojan is defined as a piece of software that pretends to be a normal application while doing something entirely different from its intended purpose and without the user’s permission. We believe Loose/Loose falls (if not perfectly) into this definition and so we detect it as Application.OSX.Loselose.A.

We know he has completely declared the games intentions, but it’s too easy to succumb to one’s curiosity and just play the game before understanding of what’s happening sinks in to our consciousness. And released in the wild, taken out of the context the author intended it to be, it is not hard to imagine someone getting aversely affected by the payload (and getting your data deleted is about as averse as it can get). Bottom line, it’s better to be strict when your important files are concerned.

Posted by Mylene Villacorte at 4:38 PM