Last December 17, Apple released its 9th Security Updates for this year. This update fixes multiple vulnerabilities in Mac OS X that were found highly critical and could lead to privilege escalation, system access and denial of service. Nearly half of this update intends to fix vulnerabilities that allows execution of arbitrary code, if successfully exploited.

This year, there are 5 large updates that we had seen. The first was released in March which fixes 32 vulnerabilities, then followed by April, July, November and this month. These 9 security updates from Apple has fixed almost 200 bugs which is about half of last year count.

Apparently, the growing popularity of Macintosh computers will continue this trend, attracting more and more attackers. This is one of the hot stuff we should watch for next year - 2008. 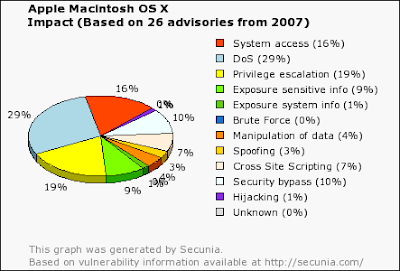